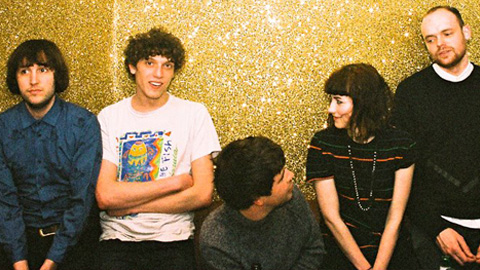 Fierce Panda and new indie club night Disorder are getting together to bring you a very special Bamboozled show on TONIGHT, Wednesday 5th December at The Bull and Gate, Kentish Town

The Event:
Bambooooozled is the Bull & Gate hoedown presented by those wild-eyed dreamers at fierce panda records which now takes place on the very first Wednesday of each and every month. This month sees new indie club night starlets Disorder join in the dreaming making it a show not to be missed!

THE MACHINE ROOM
We are very pleased to present The Machine Room from Edinburgh after their first London show for Disorder in September at Rattlesnake sold out. This will be The Machine Room's second appearance in London and it looks set to be another big show for a band which are generating a huge following in the capital.

The Machine Room are one of the most exciting new bands the UK has to offer. Their catchy dream pop/shoegaze sound has drawn great press attention and critical acclaim since they formed in 2009. The band released their debut single 'Girly' in May 2011 for Tape Studios Singles Club and their amazing debut EP 'Love From A Distance' was released in March 2012. With a new EP due out in early 2013 catch them in an intemate setting now while you can!
Listen to The Machine Room Here
Like The Machine Room On Facebook Here

The Machine Room - Head On The Floor Next Door:

RED KITES
Red Kites formed in September 2010 at The Academy of Contemporary Music in Guildford. A shared love of intense folk and rock drove the direction of the sound, while the memberÄôs very different musical backgrounds added unexpected ingredients into the mix. LiamÄôs distinctive guitar playing, BenÄôs ear for satisfying bass-line harmony, AndyÄôs powerhouse drumming and MotehÄôs songwriting led to a sound that was original while channelling the sound of hundreds of musical influences. The debut E.P 'Beat in Time' was released in April 2012.
Listen To Red Kites Here
Like Red Kites On Facebook Here

IDES
Ides is a Sadcore Punk artist and a welcome addition to the line up, fresh from supporting Kate Nash and according to PortalsSound "...sheÄôs one of the cityÄôs most exciting talents, responsible for some of the finest, darkest solo tracks in recent existence" and who are we to argue!
Listen To Ides Here
Ides Live Review Here

EDITSELECT
EDIT/SELECT describe themselves as "A young musical gang from the Art Beat of London's lower South East side" - which is about right, an edgy New Wave pop band in the finest art school tradition, with songs bristling with originality, creativity and irrepressible charm.
According to indie tastemaker and XFM DJ John Kennedy ,"They're rather good", and who are we to disagree, especially when EDIT/SELECT make such a habit of producing ingeniously catchy and inspiring tracks with classic-sounding titles like "Temple", "Our Love Is Tropical" and "This Waiting Game" Their influences include The Arctic Monkeys, Bloc Party, Joy Division, Foals, The Specials and The Maccabees
EditSelect On Facebook Here
EditSelect Website