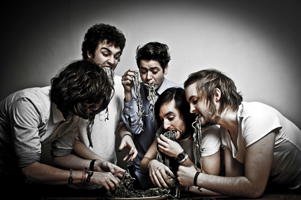 Tweet
Ultrasound To Be Joined By Hey Sholay And Bomb Factory At Single Launch!
5th August 2011

Ultrasound will be joined by Hey Sholay and Bomb Factory at their Single Launch @ The Macbeth on Wednesday 31st August.

When Tim Smith of the Cardiacs suffered a heart attack, Ultrasound were asked to reform for a benefit concert to raise money for him, and of course they couldn't refuse. So, at the start of the new decade, the 5 members of Ultrasound met, and with 4 clicks of the sticks, arrived back home. With this, a decision was made to reform and their comeback single has recently been revealed to be 'Welfare State/Sovereign', coming out August 29th on Label Fandango.

Listen to the release: soundcloud.com/label-fandango/sets/welfare-state-sovereign

Read more about the comeback: HERE

Hey Sholay have firmly put their stamp Sheffield. With capacity headline shows and support slots for Darwin Deez, Slow Club, The Crookes and others. With a really fresh sound, they are one of the most exciting live bands around. They won NME's 'Play @ Exit' competition and released their debut single 'Dreamboat' (Label Fandango) in June.

"These rapscallions mix a proggy-rock sprawl with the grace, poise and a cheeky kick in yer mardy bum of indie-rock." - Drowned In Sound.

Listen to the release: soundcloud.com/label-fandango/sets/hey-sholay-dreamboat-the-bears

Being formed in a freezing garage on a Cambridgeshire housing estate didnÄôt improve their mood. It did help them distil their rage and bewilderment at a world gone mad into short, sharp bursts of shouty, spiky, stop-start noise. The last few years have been spent getting ever louder and more furious while whittling their songs into sharp points with which to stab at the bloated corpse of popular culture. So far this has resulted in a pile of gigs, a three-track EP produced by Paul Tipler (Idlewild, EMBLD), airplay from Steve Lamacq among others and enough fans to be described as several. Normality-baiting, life-affirming and loud. Listen up.

"In a world where felt-tipping political statements on your hand is deemed a talking point, god only knows what the average man will make of this... Bomb Factory are battle-cry music for a disaffected youth. This band are essential." The Plastic Ashtray.