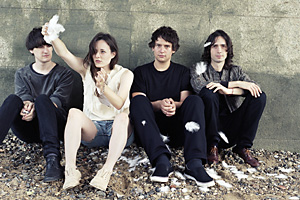 Stricken City have garnered much critical praise for their debut. ÄúFleshed out, full of flourish and wonderfully ramshackle, Songs About People I Know is a series of small successes in slightly askew songcraft. Rebekah Raa finds a way to captivate without much apparent effort and, much like Polly Jean Harvey, conveys an awful lot even when she doesnÄôt seem to be saying much. If anything, itÄôs all over way too soon. If only they knew more people.Äù 7.5 Äì PITCHFORK
STRICKEN CITY GIGS AT CLUB FANDANGO
STRICKEN CITY
LET'S BUY HAPPINESS
BEAR MASK
@ The Bull & Gate