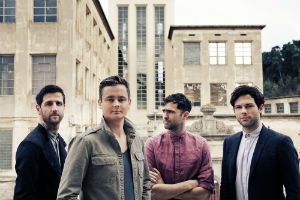 In 2003 a tiny label called fierce panda released a couple of singles by a wee band called Keane. The singles - 'Everybody's Changing' and 'This Is The Last Time' - did pretty well. You may well have heard of Keane since. Indeed, ten years and five number one albums on those very songs are appearing on Keane's Greatest Hits collection, out on November 11th.

To celebrate this event fierce panda and Club Fandango - who promoted a pawful of crucial breakthrough shows that year, culminating in a sold-out launch party for 'This Is The Last Time' at the ICA on The Mall on October 14th Äò03- are putting on a very special tiny wee show at the Tunbridge Wells Forum on Friday October 25th Äò13, precisely one decade and eleven days on from the last time we worked together.

Panda chief and Fandango co-pilot Simon Williams mused: "This is Keane going back to their roots in several possible senses. The first time fierce panda saw them was with another lucky 31 souls at the 12 Bar Club in Denmark Street (note to whacky Wikiland - NOT the Betsy Trotwood). What I remember most about their early gigs was their nonchalant approach - no matter how scuzzy the venue, no matter the wild inappropriateness of the guitar-grappling indie bands on the bill Keane never moaned or moped or over-thought things, they just gently rocked up and got on with it. And bearing in mind in 2003 we put them on at the Metro, Bull & Gate and Dublin Castle, that was a lot of rocking up to be done. There will be more than 31 people at the Tunbridge Wells Forum, but not that many more. Keane could have easily revisited the Arena circuit which is now their live home but somehow that would have missed the point. For this show is as close as they will ever get to the innocent spirit and head-spinning fun of 2003."

Support comes from vivacious alt.rock newcomers Longfellow, whose ÄòGabrielleÄô indie selfie* came out in the summer. We think theyÄôre quite excited.