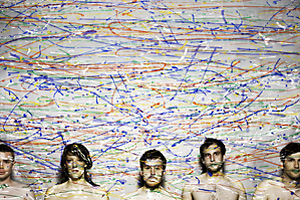 You can say many things about those cheery mouse whisperers over at Club Fandango but you could never accuse them of being ungenerous. Labelled With Love is a brand new addition to the frankly bulging Portfolio Fandango whereby once a month we hand over the keys of the esteemed Borderline venue to some hotshot indie label and for four whole hours they can do what the bally well they want. It's a bit like 'Home Alone', only with bands instead of an abandoned child. And punters instead of burglers. And a London venue instead of a house in the American burbs.
Still. First up was fierce panda, then came Fleet Street Records (on February 22nd) and now comes the third Labelled With Love night in the company of Oxford's feistiest exponents of leftfield rock, Shifty Disco. Originally launched as a CD Singles Club in 1997 the well-tuned Thames Valley collective has carefully expanded its horizons and pounded the A&R streets to bring unknown nuggets to the intelligent alt.pop.rock marketplace, all the way from AM60 to The Young Knives. Now purveyors of an excellent Download Singles Club as well as a longterm home to a flagon of louchely-hipped indie starlets (see links below) the Shifty Disco tech-heads are roaring into the capital for Labelled With Love # 3 as part of their ten year celebrations - drop your jaw over at www.myspace.com/shiftydisco10 - and the evening's entertainment looks something like this:

[Incidentally, fact fans, Shifty Disco also brought you The Unbelievable Truth. And why are we telling you this? Well, Andy Yorke of Unbelievable Truth fame has gone solo and just so happens to be playing a Club Fandango night at the Dublin Castle on March 13th. Bonza!]