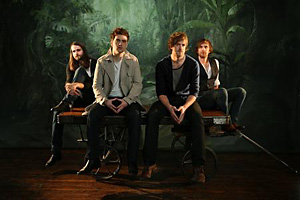 a ravished Label Fandango one sheet

The Format: LIMITED EDITION 7" SINGLE ONLY

** A brief flash of light, a shadow in the dark, a ship in the night... ROYWORLD is surely a band of stealth. One sultry night in late summer four well-mannered men play a vivacious show to a few dozen friends and enthusiasts at the Purple Turtle in Camden Town. Two weeks later they entertain a crammed industry ratfest at the Hope & Anchor in Islington. In the few days in between they are snapped up by Virgin Records. It probably isn't the shortest A&R non-race of all time, but it isn't far off. Happily, before the ink has dried on the major contract ROYWORLD agree to release a single on Label Fandango. And this is it.

** ROYWORLD consist of Rod Futrille (vocals), Timmy Miles (keyboards), Gerry Morgan (drums) and Robbie Parkin (guitar). None of them are called Roy. But they do have a Rob and a Rod in the band, which is pretty close. They are four musical refugees from various parts of these sceptred isles and they currently reside in South London.

** Their electronic home at www.myspace.com/royworldtheband will not explain everything about their muse but there are clues a'plenty: yellowing maps and sepia photographs hint at a band out to create their own classic environment - a royworld, if you will; while the list of influences - Kate Bush, Tears For Fears, New Radicals, Peter Gabriel, et al - suggest that here is a band who have heard the big music and aren't afraid to play their brand of it with a radiantly straight bat.

** As you may have guessed 'Elasticity' / 'Tinman' is ROYWORLD's first ever release. You may have also deduced that 'Elasticity' is dead smart pop like they used to make in the olden days mixed with the sort of lovely modern melodramatics which have recently seen them lurking in the studio with Andy Green, Keane's producer. The flipside 'Tinman', meanwhile, is a quietly brilliant hyperballad which will have them swooning in the aisles and sweeping fallen angels off the altar. Both songs will be appearing again on the quartet's major label debut album, slated for release in the spring of next year.

** Before then is now and ROYWORLD hereby snaffle up the nineteenth release on Label Fandango, the exclusive indie-mungous seven inch singles club set up by a wise man from Pointy Recordings and a funboy from fierce panda records. The last great release of 2007 by the first great breakthrough band of 2008? Oh, go on then.