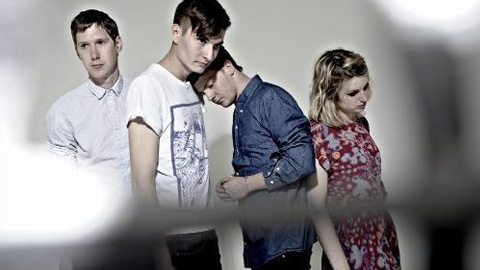 Itâs the second Tuesday of March and that can only mean two things: firstly weâre heading for the warmer haven of spring and secondly fierce panda records and Disorder promotions are ready to combine forces to entertain the alt.pop-loving public with yet another bill of thrilling pop joys, like this..

The Bands: I AM IN LOVE + DEATH RATTLE + EMILE BERNARD

I AM IN LOVE (onstage 10pm) are three boys and two girls from Manor House who can pull as many panting punters in Leipzig as they can in Leicester thanks to a smart continental work ethic and some even smarter tunes: think smashing early '80s Smash Hits-style synthpop injected with a galloping dollop of DFAâs DNA . Something very special is about to happen with this band and youâll be there from the very start by watching the video for 'Proposal' (released on Label Fandango / fierce panda on March 3rd) right here> YouTube
www.facebook.com/iaminlovemusic

DEATH RATTLE (onstage 9.15pm) are a London based electro combo comprising of Chris Hamilton & Helen Hamilton. If CHVRCHES collaborated with the likes of Zola Jesus they might sound something like this - Death Rattleâs dark haunting sounds backed by angelic vocals project a strong sound that doesnât feel out of place in a gothic church (or should I say chvrch) as youâll see in the live video for âWhite Ropesâ here on YouTube
www.deathrattle.tv

EMILE BERNARD (onstage 8.30pm) is a not a French Post-Impressionist painter but actually a London based band fronted by Paolo Fornasari. When you look like the artistic twin of an Emile Bernard painting, chances are there's a paint stroke of something special. With the stripped down romantic quality of Villagers, and a raw voice joining ranks with the likes of Woodkid, Emile Bernard offers quirky poetry with tints of dark electronica.
www.facebook.com/emilebernarduk