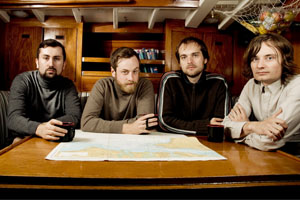 Tweet
I Like Trains To Headline Next Bamboozled Night At The Bull And Gate, 21st September
30th August 2011

I LIKE TRAINS - 10.00PM
www.iliketrains.co.uk
This band has created their own singular world sitting in delightfully dark, cultish contrast to the rest of the music scene. Their musical intentions are far removed from the traditional clich?©s of the media and yet through their spine tingling anthems they have earned a huge following of dedicated and passionate fans. With the release of their debut album in October, their reputation has extended far and wide, out of Leeds, into Europe and across to America. Termed fittingly by The Times as ÄòLibrary RockÄô, their use of tragic historical characters and morose events to instill specific emotion to their epic music, is exquisitely English and has won them support from all areas. They have been covered widely in publications ranging from the NME to the Financial Times, The Sun and Daily Mail to Rail News; from Aesthetica, Bizarre and American Hustler to Broadsheet press. They have been quietly praised in all the music monthlies and were number 2 in Mojo listeners best songs. They have been on Radio One, Radio 2, Radio 4, 6Music and The BBCÄôs Politics Programme, have been mentioned in the House of Commons and given talks at universities

Though history may seem an unlikely 'rock' topic, I LIKE TRAINS succeed in bringing the past into present via incredible, rousing tales of courage and failure set against beautiful, often monstrous musical pieces.

We expect they'll be playing material from their NEW ALBUM He Who Saw The Deep (out NOW).