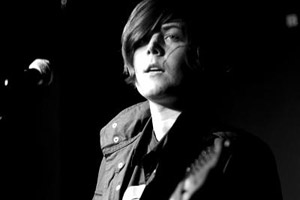 A melodramatic fierce panda one sheet.

ADMISSION £6.00 or £5.00 flyer downloadable from www.clubfandango.co.uk

The Truth: Club Panda is fierce panda records’ groovy night out which takes place under the auspices of Club Fandango on the first Tuesday of each and every month and which features a pawful of new acts which have ticked their fancy of late. And most of those bands sound like this:

KAPUTT (onstage 10.15pm) are fronted by the splendidly named Silke Steidinger, who once performed heroically in The Go! Team and who now provides distracted vocals and disgruntled guitars to Kaputt’s chuggy, brassy post-new wave noise, as evinced by current single ‘Family Tree’ (Too Pure).
www.myspace.com/kaputtmusic

RACE HORSES (onstage 8.45pm) would appear not to offer much in the way of exotic femme fatales up front, although having a Meilyr and a Gwion in their four-man-strong Welsh line-up more than makes up for such an aberration, not least when backed up by the quartet’s cheerily warm take on sunny-side-up ‘60s pop, as evinced by current single ‘Cake’ (Fantastic Plastic).
www.myspace.com/racehorsesmusic

FRESH LEGS (onstage 8.00pm) are fronted by the disappointingly succinctly-named Ella, who at least has the good grace to have notched up a comparison to thoroughly fantasmagorical ‘70s siren Lene Lovich along the way to forging a jittery indierock racket with angry chords and frisky basslines, as – you’ve guessed it - evinced by current single ‘Chess’ (Cool For Cats).
www.myspace.com/thosefreshlegs