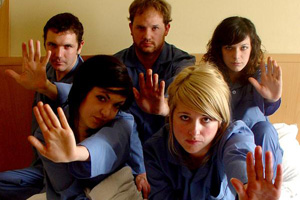 Shrag are as a wise man writes: "I know you all have good taste and like a cute band as much as the rest of us. So it's time to let you in on a secret that just won't stay quiet for any longer. There's a beat combo from Brighton who number five that I've been watching for a while now and are set to storm the world faster than global warming. They go by the name of Shrag and have left hip underground publications like Artrocker and the New Musical Express chasing shadows and sniffing in vain after their scented backsides. Featuring the most enigmatic chanteuse in pop since Nico, Cambridge-dodger Helen turned her back on toffs and academia to sings songs about teenage pregnancy and unsuitable cunnilinguists. With Russell 'the' Warrior on bass, Leigh Anne 'sticks' Walter on drums, Bob 'badder than Mr Whitney Houston' Brown on guitar, their musical line-up was completed when they snatched Steph 'too Good for the Pipettes' Goodman away from the legendary Blue Minkies to play one-note keyboard. Each are masters of their craft and fear no-one in their ability to out drink any other musician who ever dared set foot on a stage Äì even Mark E Smith who they baited in a surreal dream sequence on their first single. Having fought off a major label bidding war, pop mogul giant John Jervis has been keeping them real on his highly esteemed Where Its At Is Where You Are label and releasing real 7 inch singles like the Shadows, Pavement and Prolapse used to make."