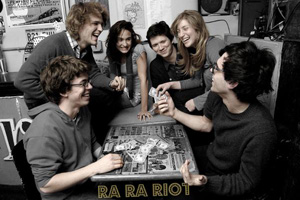 Ra Ra Riot met at New York's Syracuse University in 2006 through a shared desire to form a band. A combination of friends and friends of friends lead to the formation of RA RA RIOT who, barely a year later, get to release their debut single in the UK on Label Fandango. The double aa-side release of 'Each Year' / 'A Manner To Act' is just the tip of a creative iceberg as, rather neatly, the music of Ra Ra Riot blends the fury of post punk with melodic orchestral sensibilities. One listen to the bandÄö's four tracks on their MySpace site (www.myspace.com/rarariot) can lead to a long winded game of spot the influences - there is (arcade) fire in their bellies and the sweet jangle of The Smiths in their veins, for sure, but the simple truth is that the multi-talented, communally creative Ra Ra Riot donÄö?Ñ?¥t really sound like anyone apart from themselves. This ebullient individuality has held the band in fine stead through CMJ '06, SXSW '07, an A&R whirlwind and rapturous applause from the NME to the point where their busy summer plans were running on parallel lines - in the UK there is the 7" release and a string of festival appearances, in the States an EP release (cunningly entitled 'Ra Ra Riot') and a lengthy tour with Tokyo Police Club.
RA RA RIOT RELEASES