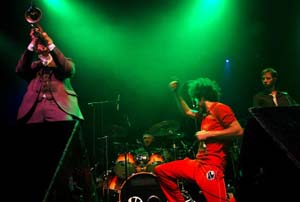 Imperial Leisure are back on the road for a couple of special gigs to air new material from their forthcoming second album. The newly-streamlined band have been hard at work throughout the year writing, and have just finished recording the new material with producer Paul Tipler. Comprising Denis Smith on vocals, AJ White on guitar, Dan Dobson on bass, Scott Vining on drums, Stu Maxwell on keyboards and with Rob OÄôNeale and Jerome Harper guesting on brass, the sound is leaner and meaner, whilst retaining the bandÄôs trademark energy and intensely catchy songs. Evolving from the ska-rock sound of their debut album ÄòThe Art of Saying NothingÄô, the new record (working title: Bitter and Twisted) is moving in a punk/electro direction, darker, dirtier and more raw, and scheduled for release in Spring 2011.
IMPERIAL LEISURE GIGS AT CLUB FANDANGO
IMPERIAL LEISURE
EVRYONE
LOCOMOTIVES
@ The Bull & Gate