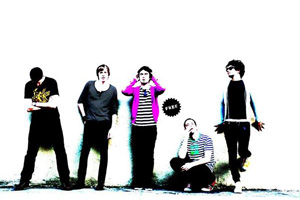 The Moths! are a West London trio who, in true Äö"Our Tune" style, all studied at the same secondary school but then became separated on the road to musical Valhalla. Eschewing the dull-eared bravado of the nascent Lad Rock scene The Moths proffer love, arrogance, poetry, some cracking drum machine rhythms and a frontman who has been drawing creditable comparisons to everyone from Pete Shelley to Marc Almond via Brett Anderson. They released their debut single, a triple a-side of 'Games/Wild Birds/Valentine', on Label Fandango on April 16th.
THE MOTHS! RELEASES

THE MOTHS! GIGS AT CLUB FANDANGO
THE MOTHS!
GODWITS
LIGHTS AND SOUNDS
@ The Borderline

Thursday 18th January 2007 Emma Mcglynn & The Monorails
The Moths!
A Silent Film
Neurosonic @ The Borderline 07:45pm - £7 / £6 with flyerIn Association With The Bmi
MEXICO
THE STRANGE DEATH OF LIBERAL ENGLAND
586
THE MOTHS!
@ The Dublin Castle