The Conway Story are a 5 piece collective hailing from various parts of the globe, but currently based in London. They describe their songs as ballads, only some of t ... 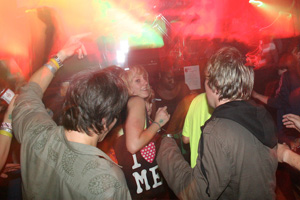 If I Were King are a Halifax 6-piece who have garnered praise from all quarters recently. Having being featured on the Radio One website, they have been championed ...

The Shore are a young trio formed on the Silver Lake scene, with influences including Neil Young, Coldplay and The Verve, bringing it all together in a grand musical vision. Their debut album was released on Maverick and they're set to play the Wireless festival the day after this gig. ...

Infrasound play intense, thought-provoking songs, which draw from influences as diverse as Can, Joy Division and PIL. Having made their debut in Brudenell Social club the fivesome came to the attention of a local promoter and supports with The Fall and Black Rebel Motorcycle Club quickly followed, as did the Carling Festival. They released their debut 'Fire ...