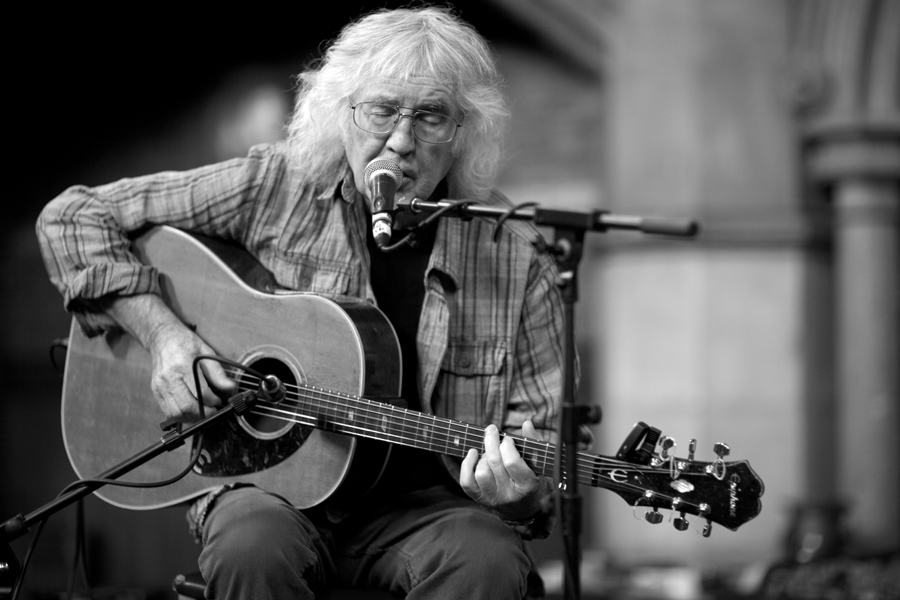 Wizz Jones began his musical career leading a country and skiffle band called "The Wranglers" in his home town of Croydon, Surrey in 1958. He had been inspired to take up the acoustic guitar a year or so before this after hearing such guitar luminaries as Big Bill Broonzy, Rambling Jack Elliot and Muddy Waters playing at a club in London organized by Cyril Davies and Alexis Korner (The Roundhouse in Wardour Street). Having learned most of his blues licks from Long John Baldry and Davy Graham whilst playing in the coffee bars of Soho, Wizz followed the time-honoured trail - busking throughout Europe with many different musicians including at one time a budding young blues-man named Rod Stewart!
On returning to Britain in 1963, Wizz formed a bluegrass duo with banjo-picker Pete Stanley, a partnership which was to last for four years during which time Wizz and Pete recorded a single and an LP for EMI and enjoyed great popularity on the booming Folk Club and College circuit of the 1960's.
Wizz and Pete went their separate ways at the end of 1967 and Wizz returned to solo work, collaborating with songwriter Alan Tunbridge (an artist friend from the Soho days) and occasionally with guitarist Peter Berryman. He enjoyed considerable success throughout the 70's in Europe and Scandinavia both as a touring soloist and together with Sandy in the group "Lazy Farmer".
However back in England and several albums later - in spite of being often mentioned as an important early influence by artists such as Eric Clapton, John Renbourn and Ralph McTell, Wizz retained a certain "musicians's musician" reputation, only occasionally playing club gigs and the odd festival spot sometimes with his son Simeon on Saxophone, Flute and Harmonica. Then as a result of the interest shown in his album "The Grapes Of Life" released by Run River Records in 1988, a feature in Folk Roots magazine (October 1990), and appearances at several major festivals with Simeon in 91 and 92 - Wizz began to enjoy a bit of a come-back!
1993 saw the release of two CDs - "The Village Thing Tapes" on the German label Wundertute featuring selected tracks from three Wizz Jones albums from the seventies and "Late Nights and Long Days" on the Fellside label featuring Wizz and Simeon Jones. Simeon still does the occasional gig with Wizz but mostly works on the rock scene while Wizz continues to tour on the acoustic folk and blues circuit. Wizz also has two tracks featured on the Demon CD "Acoustic Routes" taken from the BBC TV documentary on Bert Jansch.
In 1995 Wizz recorded a CD for the American label Scenscof which features all aspects of his repertoire including the title song "Dazzling Stranger" (written by Alan Tunbridge, a firm favourite for many years and often requested at gigs).
WIZZ JONES GIGS AT CLUB FANDANGO
WIZZ JONES
DARREN HAYMAN
JULIE MURPHY
@ The Lexington