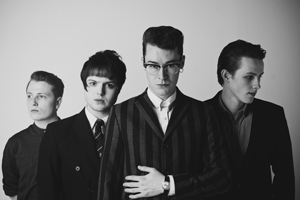 Alex Butler And The Opals

Alex Butler And The Opals and the Opals are a band formed from members of what were already prominent acts on the Newcastle music scene.
They have came together to form something quite spectacular.
Having been chosen as Nick Grimshaw's up and coming act and the last single release reaching number 18 in the Mojo magazine chart, 2014 promises to be a brilliant year for the band.
ALEX BUTLER AND THE OPALS GIGS AT CLUB FANDANGO
ALEX BUTLER AND THE OPALS
HUCK AND THE XANDER BAND
GULLS
@ Buffalo Bar