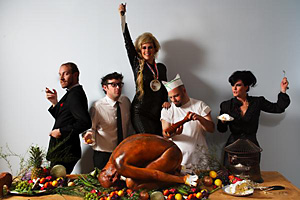 Heloise & The Savoir Faire are an electro-rock outfit from New York having just released their new album 'Trash, Rats and Microphones' via Simian Records (Elijah WoodÄôs new label and joint-venture with Yep Roc Records). With a live show described by Disorder Magazine as a 'great big flying disco ball swerving through a relentless shower of pink glitter and synth-lasers,' Heloise & The Savior Faire have gained popularity in the UK after making their TV debut on The Graham Norton Show. They recently appeared on The Friday Night Project and galavanted around London for week, popping in at the Cock and Stay Beautiful, among others. Produced with and engineered by Andrew Schneider at Translator Audio in Brooklyn, 'Trash, Rats and Microphones' emits the energy, sexuality and humor of the live show. The album also features guest vocals by Debbie Harry who recently called Heloise & The Savior Faire one of her favorite underground bands in The New York Times Style Magazine. Debbie is featured on the songs 'Downtown' and 'Canadian Changs'.