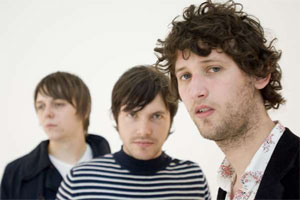 Brinkman think it's all very simple: write a load of honest melody-drenched lyrical pop songs and watch even the meanest of people grinning like fools and doing the conga (it happened once). With hearts on sleeves and occasionally tongues in cheeks, they're not afraid to sing about their obsession with (one particular) Hollywood film starlet or going dancing on a Friday night. If you need to decide whether you think you're going to like them before you've heard them, these comparisons have been known to help - The Kinks, Lemonheads and Squeeze. They release their debut single 'Kirsten Dunst' on Oct 9th via Label Fandango.
BRINKMAN RELEASES