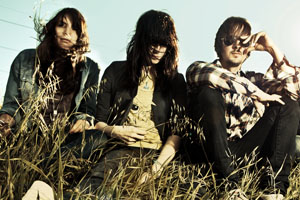 Scanners recorded their first album 'Violence is Golden' themselves, later releasing it via US label Dim Mak (Bloc Party, Gossip, The Kills). They toured there through 2007, travelling through the West Coast and out to NYC for some shows, later going down a storm at SXSW in Texas which led to them being asked to play on NBC's The Carson Daly Show. They worked on their second album 'Submarine' with Stephen Hague (Blur, Pet Shop Boys), released in the UK, March 2011. The band are currently in the studio recording their third album.
SCANNERS GIGS AT CLUB FANDANGO
SCANNERS
THE MACHINE ROOM
STRONG ASIAN MOTHERS
@ Birthdays