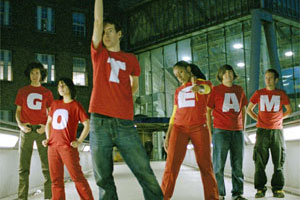 The Go! Team are lodged somewhere in the previously undiscovered zone where Sonic Youth meets the Jackson 5. They kick out the jams and then spread it on crumpets for tea. Its hand brake turn music, its doing the ton, its double D-ing the clutch in a dodge challenger. The Brighton quintet's album Thunder, Lightning, Strike is released in September on Memphis Industries.
ARTIST LIVE SHOWS
The Dublin Castle
Tuesday 10th August 2004
MAILING LIST
Sign up to our mailing list here