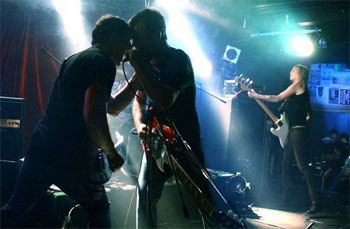 Future Of The Left

Future Of The Left released their new record, 'the plot against common sense' on 11th June 2012 through Xtra Mile Recordings in the UK and Europe. Recently expanded to a four-piece, initially as a bet, the band originally conceived the record as a Broadway musical based on the recent British phone-hacking scandal but were forced to abandon this idea due to budgetary restrictions. This is not a joke. After writing hundreds of songs fifteen were recorded and placed into an order deliberately selected to exhibit the full dynamic range of the experience, a gift which will be lost to anybody who regularly utilitises the shuffle function on their mp3 player.