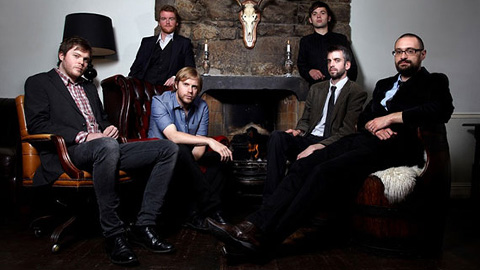 Having recently celebrated their 10th anniversary, Edinburghâs resolutely unbroken Broken Records return in 2018 with the release of their fourth studio album entitled âWhat We Might Knowâ on 30th March. As part of the countdown to the release the euphoric sextet are headlining a special show at The Lexington in that there London Village with some sumptuously melodic supports, like this:

BROKEN RECORDS (onstage 9.45pm) After a decade of solid US and European touring, two albums on the legendary 4AD label; âUntil The Earth begins To Partâ (2009), âLet Me Come Homeâ (2010) and another on the bandâs own J Sharp Records imprint, âWeights & Pulleysâ (2014), forthcoming longplayer âWhat We Might Knowâ marks a departure from Broken Recordsâ traditional cinematic, string-drenched sound.
The band re-united with producer Stephen Watkins (PAWS, Amanda Palmer, Teen Canteen) who recorded their self-released debut EP in 2007 and the result is a set of eleven songs deliberately stripped back to recapture the chaotic energy of that early EP, and the ecstatic live shows the band are known for.
In their 10-year career, Broken Records have toured with the likes of Editors and The National and have also performed at some of the biggest festivals in the world including Glastonbury, SXSW, T in the Park and a main-stage slot at Latitude. Their live shows have been described as eliciting an âecstatic reaction" by The Skinny. www.facebook.com/brokenrecords

SOFTER STILL (onstage 8.45pm) are a dreampop band from Shepperton in Surrey. Over the past few months their âVisions Of Youâ EP has been dazzling all and sundry, from Steve Lamacq to lashings of digital playlists, with its canny blend of marginally distraught melodies and lovingly caressed guitars. www.facebook.com/softerstillband

CHRIS HORNSBY (onstage 8.00pm) works with things he can strum, blow, hit, kick and shake, creating an authentic sound with traces of folks, Americana and laidback rock. His songs are suffused with imagery and rich with modern storytelling, as evinced by current album âModern Hinterlandâ. www.facebook.com/chrishornsby