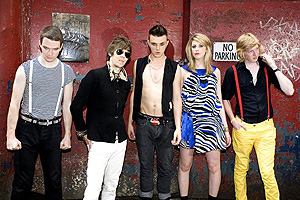 Daggers are five intense young dreamers from Manchester, Englandshire. 'Money / Magazine' is their first ever release as Daggers, although the more astute children of the night out there could be aware that these were the people behind the terrific 'After Midnight' single on High Voltage in 2006 under the name of Bureau.

Such shady rumours suit them well. Fronted by the heroically impressive figure of Theo, a sharp-cheekboned panda-eyed hybrid of Billy Idol and George Michael who isn't averse to wearing giant white Wham!-style t-shirts when the occasion demands, Daggers are men (and a woman) on a mission to bring the passion, poise and poison of the early '80s kicking and sneering into the fairly new millennium.

The 7" single is available for pre-order.