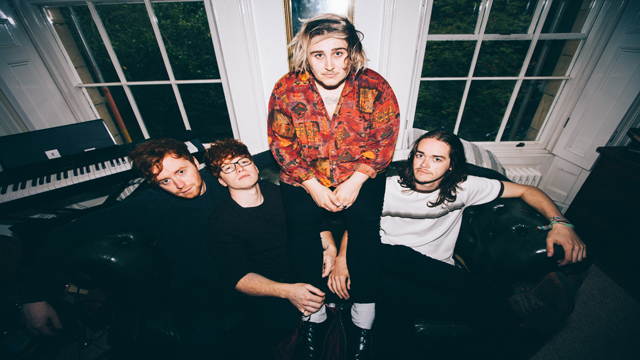 ** âMUNROâ IS LAUNCHED AT BIRTHDAYS ON AUGUST 23RD **

Hectic Newcastle quartet Coquin Migale release their debut album âMunroâ on August 19th, chased to the wire by the splendidly rumbustious âPT. 2â single. To celebrate this event they play a special free headline show at Birthdays, headlining a bill which sees indie label roustabouts fierce panda face off against End Of The Trail Records to present a night of tremendous nonchalantly rowdy happenings, much like thisâ¦

(onstage 10.15pm) are four men from the north-eastern lands of Newcastle and are pronounced âCo-kane Mag-elleâ. As the title of their previous âGrindieâ single may suggest they peddle a winningly grin-worthy car-crashing blend of grunge and indie with giant radio support from the likes of Huw Stephens, Steve Lamacq and Phil Taggart. The mighty âMunroâ debut album is released on August 19th. Facebook

SEAN GRANT & THE WOLFGANG (onstage 9.30pm) are four men from the middling lands of Northampton and Milton Keynes who play barnstorming, blood-pumping, boot-stomping indiefolkpunk rock with beards, blazers and blisteringly rowdy tunesmithery. They have their very own celebration here with the launch of the title track of their â7 deadly 7â EP which is actually neither rowdy nor blistering but rather deathlessly choral and fabulously compelling. Facebook

BLUSH (onstage 8.45pm) formed only in in summer 2015 but have come racing out of the blocks, being snapped up by happening indie label End Of The Trail records. Their quite frankly brilliant single âDaggersâ had all the hallmarks of a classic single and âWRNGâ â released on August 5th - is more of the same, being part Strokes, part Wire and somehow all their own. Facebook

WHITE GIANT (onstage 8.00pm) are three hirsute gentlemen from Leicestershire who make energetic and complex rock workouts underpinned by a dark, dancey edge with a flash of Foals, a pinch of Placebo and a buttload of angst. Facebook