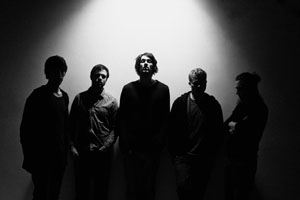 Part of Indies Month in association with A.I.M. and Labelled With Love Festival!

As they do every month at Club Killing Moon, tonight our friends at Killing Moon Limited have created a night that shows off brand new signing Duologue and other bands you should know about and love. They are:

DUOLOGUE - 10:15PM
They've emerged from LondonÄôs live music scene over the past six months swirling up a storm of anticipation via the incredible one off shows theyÄôve created at underground venues and newly discovered performance spaces, promoted solely through word of mouth and a burgeoning mailing list of loyal fans and faithful followers. Deceptively titled they are in fact a five piece, consisting of founding members Tim Digby Bell (vox) and Toby Leeming (live programming and beats) as well as violinist Seb Dilleyston, guitar, Toby Lee and Ross Stone on bass. Theirs is a hard to quantify sound one which eschews the usual prescribed definitions of a rock band as they meld electronic and analogue over inescapably haunting melodies, cinematic strings and growling shadowy bass.
www.facebook.com/duologuemusic

"Inspired by Buckley and Burial, these Bristol boys tread a fine line between chilling and chill-out" - Guardian New Band of the Day, Jan 2012.

"A four-piece from Bristol who write moving, naked prayers to despair and resignation" Äì Music Broke My Bones.
www.facebook.com/seasfire THE VESTALS - 8.45pm
A fascinating throwback to the moody, melancholic times of the 1980s when The Cure and The Sisters Of Mercy were top of peopleÄôs agenda. Funnily enough, it wonÄôt be long before this mysterious Äì as such for drumming up an air of anonymity Äì five-piece from South Wales are the same; as despite being on the radar for a matter of months, thereÄôs already quite a buzz about this scuzzy bunch.
https://www.facebook.com/thevestals

H.A.M. - 8:00PM
Rather than dwelling on just how the hell we even came across the fabulously-named H.A.M, mainly as we could spend weeks pondering on this point and getting absolutely nowhere owing the sheer labyrinth-like clicking-around-on-the-internet mode of activity weÄôve undertaken in terms of our journey of musical discovery at this stage (we used to call this Äúthe Myspace gameÄù Äì to our younger readers, think of Myspace as Facebook but when dinosaurs ruled the Earth), weÄôve decided to concentrate on working out what those three precious letters actually stand for. The foremost, as in the most plausible on our mind is High And Mighty. WeÄôve also thunk up the following: Hittng A Monkey, Holding Anti-Matter (Star Trek 4 Lyf yÄôall), Holy Ass Material, Hot Autistic Maturity, and, our personal favourite, Hamster Ape Man (a beast developed in secret by our government to combat and defeat Man Bear Pig, obviously). It may well be all of those things. It may well be none of them. Maybe the dudes behind H.A.M, if indeed they are dudes, just really like ham and like to keep us guessing like the planks we are.
www.facebook.com/weareHAM

Tickets are £6 O.T.D or £5 in advance here
RSVP on Facebook here.