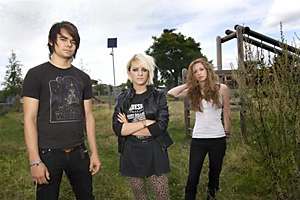 GOLDHEART ASSEMBLY, BLEECH, THE CROOKES, FICTION AND ARDENTJOHN LINE UP TO BREAK IN THE NEW YEAR!!!

THE PANDAMONIUM VIBE: fierce panda & Club Fandango (and friends) present a clutch of new leftfield combos playing four cheery shows smack bang at the start of 2010 to nurse LondonÄôs concert goers through the perils of the empty New Year gig calendar. As formulas go this one is simple but splendidly effective.

** Tuesday January 5th: Cool For Cats presents...
BUFFALO BAR (HIGHBURY)
Super-cool 7Äù singles clubbers COOL FOR CATS present an evening of angular indie thrills starring sparky traumapop trio WETDOG, who proffer a prim(itive) and proper racket, as evinced by riotous current single ÄòLower LegÄô. Before then we give you FICTION, who provide a touch of Talking Heads and a glimpse of calypso grooves in their terse, intelligent musical travels. Super-capable support comes from snappy, scrappy all-boy trio SIR YES SIR who deliver a splendidly hectic old school indie mash-up of Seafood, The Wedding Present and Sonic Youth. And up front we have two boy / two girl freakouts CHAPTER 24, who play itchy twitchy noises which have been described as sounding like ÄúThe Slits playing psychedelic rockÄù. Indeed!

** Wednesday January 6th: Club Fandango presents...
229 (GREAT PORTLAND STREET)
Promoting stalwarts CLUB FANDANGO present an evening of cheerily eclectic leftfield perambulations fronted up by the fearsomely hard-working girl-boy-girl trio BLEECH, who are gothic of guitar and impressively surly of vocal. In vibrant support we have the sweeping swoonsmithery of CATS AND CATS AND CATS, all tangled violins and barely suppressed emotional violence; PATCH WILLIAM, who provide spacious and summery indiepop with a touch of the Maccabees and a twitterage of support from Mr Stephen Fry; and MAGIC AND FUR, whose coolheaded synth antics take us back to the laconic brain-pop heyday of Black and ItÄôs Immaterial. Told you it was eclectic.

** Thursday January 7th: fierce panda presents An Evening With Goldheart Assembly...
THE MONARCH (CAMDEN)
Indie dreamers fierce panda records have done the sensible thing and persuaded their newest signings GOLDHEART ASSEMBLY to host An Evening Of Fine Entertainment. This Evening starts with the deep, dark sounds of THEE SINGLE SPY, a seven-strong collective with a propensity for lush, baroque-indie tunes. Then comes the snappy, crackling guitarpop of THE CROOKES, whoÄôll be shuffling down from Sheffield with their tidy fringes and flighty tunes such as ÄòYes, Yes, WeÄôre MagiciansÄô. And then John and Jim from Goldheart Assembly will continue the New Year preparations for the February 22nd launch of their debut album, ÄòWolves And ThievesÄô, with an intimate acoustic set of bold, Goldhearted tunes. Throw in magical compere Magic Pete (www.peteismagic.com) and COSMIC SLOP DJs until 12.30am and the Monarch is very much your alt.rock lobster.

** Friday January 8th: Label Fandango presents...
THE WILMINGTON ARMS (CLERKENWELL)
Esteemed promotions 7Äù spin-off record company LABEL FANDANGO takes the reins for an evening of soul-warming joys. In top spot we have ARDENTJOHN (yes, itÄôs all one word), who are Äòeading down from Edinburgh with their lush, languid orchestral pop noise which makes us think of Doves feeling some sad alt.country love and who have a Label Fandango download single out this very week, ie January 4th, pointing the way to the self-release of their own ÄòOn The WireÄô album. In the middle sector we give you THE COMPLETE SHORT STORIES, who number seven and play complicated, grown-up songs with swirly bits and swelling choruses and who are plotting a Label Fandango single release in February. And first out of the blocks will be THE RULES, which was started by one Graeme Wylie playing solo a few months ago and then turned into Äúa band of nice guys who make nice musicÄù and who like Death Cab For Cutie. For some reason this makes us happier than a bear in a free bar.

THE BACKSTORY: Bored senseless by the traditional gig-free post-Christmas lull? Welcome then to Pandamonium 2010, wherein fierce panda, Club Fandango and friends put on a handful of shows to shake up those New Year blues. Pandamonium 2009 saw the enthusiastic likes of HATCHAM SOCIAL, THE RULING CLASS, KASMS, PREGO, THE COMPUTERS, THE MOLOTOVS, DEREK MEINS and THE KABEEDIES all playing kickabout with the Pandamonium ball. And in 2010 the aim remains the same, which is to kick all those facile New YearÄôs resolutions straight into touch - retox, not detox! - by blasting the system with several doses of melodic chaos administered by some of our very favourite up-and-coming combos. More information belowÄ¶