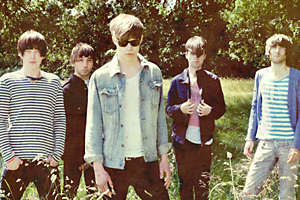 The Back Story: Club Panda is a monthly night brought to you by the kind beasties behind fierce panda records. A very long time ago (ie 1999) it took place at the Bull & Gate. A much shorter time ago (ie 2008) it was reborn under the auspices of Club Fandango at the 229. And then not very long ago at all it was operating out of the Dublin Castle in Camden Town until Club Fandango said farewell to that esteemed venue on September 8th 2009 and headed off into the sunset for the launch of a slew of rather ace new nights, of which Club Panda at The Lexington on the third Thursday every month is one. And the first third Thursday is Thursday 22nd October And here is some information about the ÄòturnsÄô.

THE RULING CLASS (onstage 10.00pm) are five heartily befringed pop dreamers who live in North London and who make fantastically phased old school indierock music with reverb and emotion and cheekbones and ace tunes which sound a little bit like if The Stones Roses had signed to Creation instead of Silvertone way back when. This special Club Panda appearance is their first in the capital since they hosted a raucous 100 Club show in the summer (for the release of their ÄòMarian ShrineÄô single), and will be their last London headline show until 2010. www.myspace.com/therulingclassuk¬

LION CLUB (onstage 9.15pm) ÄúThese young cubs may only have an average age of 17, but their experimental minimalism and epic soundscapes have a mighty emotive roar.Äù So said the NME, and we couldnÄôt have put it better ourselves. So we wonÄôt. www.myspace.com/lionclub¬

THE LOUCHE (onstage 8.30pm) Äúlive up to their name by cutting their blissfully languorous bottlenecked guitars and yearning harmonica sighs with a healthy dose of space and momentary pauses which unlock the musicÄôs almost transcendental power.Äù So says their myspace, and we canÄôt beat that, either. Suffice to say that The Louche feature fragrant refugees from PeopleÄôs Revolutionary Choir and The Rockingbirds and release the frankly swoon-tastic single ÄòLouisaÄô on November 9th on their very own The Company Does record label. www.myspace.com/theloucheband¬