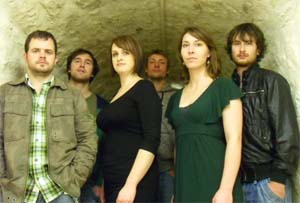 ARDENT JOHN + THE OCTOBER GAME + NO AND THE MAYBES + MEATEYE & DILLON

The Truth: once upon a melody, at the fluffy tail end of the last century, Club Panda and its fairy godmother dallied with the bunnies at the Bull & Gate in Kentish Town. And here should be where the story ends.

Yet against all the laws of promoting in the summer of 2009, a mere ten years since the fresh faced likes of Coldplay first came out to play, the brains behind Club Panda dusted off their contacts book and their big gigging bottoms and made their heroic return under the auspices of Club Fandango.

Now happily embedded in the first-Tuesday-of-every-month slot at the Dublin Castle, Club Panda’s eleventh comeback show is another careful blend of mellow melodies and perky percussive interludes, and those melodies and interludes sound something like this…

ARDENT JOHN (onstage 10.15pm) are from Edinburgh and make a very big and very clever noise which carefully folds together the sweet innocence of Fleet Foxes with the multi-layered melancholy of Doves to great hazy effect. They have full-length album tucked under their belts that sounds ace. And we should know because we’ve heard it.
www.myspace.com/ardentjohnmusic

THE OCTOBER GAME (onstage 9.30pm) are from Bedford and sound so great they are making their second Fandango appearance of the spring following a terrific debut 229 show a few weeks back. They’re a bit lush, a bit epic, a touch experimental and a little bit weepy. We like them.
www.myspace.com/theoctobergame

NO AND THE MAYBES (onstage 8.45pm) are from Denmark and make electropop-tastic noises which are lovely and witty and cool and sound like the Beach Boys and Blur and Prefab Sprout, although not necessarily at the same time. But don’t just take our wibblings for it – wrap your ears around their new single ‘Petra Petrified’ for the full SP.
www.myspace.com/noandthemaybes

MEATEYE & DILLON (onstage 8.00pm) are two men who live in North London who met in a pub and bonded over a love of crosswords and graphical humour. Together they play soft and gentle acoustic tunes that sound a little bit like Death Cab For Cutie playing Simon & Garfunkel and probably sound a lot better than that sounds.
www.myspace.com/meateyedillon