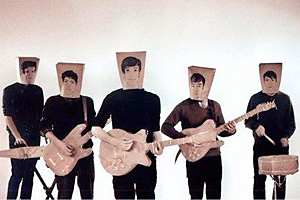 THE MOLOTOVS (onstage 10.15pm) are five erudite young men who purvey a smouldering blend of French barroom muzak and English pop sensibilities. This has – somewhat perversely - seen them gently hoover up comparisons to New York combos such as The Walkmen and Vampire Weekend since their ‘Flowers’ single came out on Cool For Cats in late 2008. Imminent follow up ‘Cities Guest’ is preparing for a springtime launch, and The Molotovs also get bonus Brucie points for being the very first band we saw in 2009, opening up our Pandamonium event at the Old Blue Last way back on January 5th. Was it just a dream? No. No, it wasn’t. www.myspace.com/themolotovs

DYNAMO GARAGE (onstage 9.30pm) also featured at our Pandamonium shindig, but they played the last night at the Wilmington Arms, which means that they were the fifteenth band we saw in 2009. And well worth the wait they were too, as these five young chaps peddle subtle and elegant guitar-twinkling noises as well as a nice line in raffish stage attire. Next month they play shows in St Ives and Porthtowan. We, frankly, are jealous. www.myspace.com/dynamogarage

BAREFOOT CONFESSOR (onstage 8.45pm) are a West London fourpiece who we last saw playing to an alarming Academy full of young teenagers pretending to be drunk adults and who play Beatles-infused guitarpop which is a bit shuffly, a bit skiffly and a little bit scuffed. www.myspace.com/barefootconfessor

TAPETHERADIO (onstage 8.00pm) are three men from South London who create taut, fraught jagged little pop thrills which are played with such defiance and determination they leave no time for any gapsintheirname. They have recently been on tour with Athlete and live at www.myspace.com/tapetheradio