The Dandelions have a distinct sartorial style that has drawn comparisons with The Stones, Stooges and The Who. The Dandelions spearhead a new breed of ubercool po ...

The Rocks have been caused all manner of palpitations in the underground since their inception, in no small part to a riotous live show which has had punters p ... 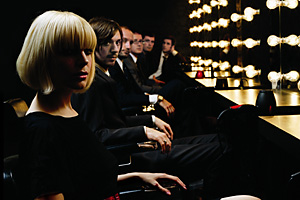 Lucky Soul are, for those in the know, the worst kept secret in female-fronted, Spector-soaked pop. Indeed, 2007 turned out to be quite a year for this super stylish London six-piece. Following the release of their sparkling debut album in April, 'The Great Unwanted', they won over thousands of hearts across the world with their lush, love-struck, classic po ...

The Glass have been garnering rave reviews in the dance music press since the release of their debut single 'Won't Bother Me', turning DJs into fans, and their peers into supporters. Mylo remixed the band's second single and Tiga wonÄö?Ñ????ë?¬t stop listening to their record. The band has already played with The Go! Team, DJ Hell, The Bravery, Mylo, and ...