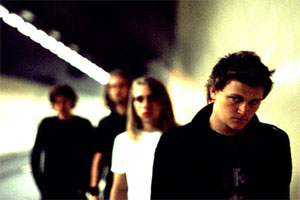 Make Good Your Escape played for years in various bands in their rather uninspiring hometown of Chichester, slowly honing their abilities and developing an intense love for playing live. MGYE was born in the summer of 2004. Since then, they've toured the country several times, played the CMJ festival in New York, signed to fierce panda, released three singles and a mini album, been played regularly on Radio 1 and XFM, been awarded Single Of The Week on BBC 6 Music and received great praise from magazines like Kerrang and Rocksound. While we they extremely proud, grateful and excited of our achievements so far, this is just the beginning and we are hungry for more. 'The music we play is not based on fashion or trends,' they say, 'we will not bow down to what is expected... we never have and never will, because we want to make music that stands the test of time.' MGYE released their new single 'Real' on April 9th on fierce panda.
MAKE GOOD YOUR ESCAPE GIGS AT CLUB FANDANGO
LAND OF TALK
THE MOTHS!
LOOK SEE PROOF
MAKE GOOD YOUR ESCAPE
@ The Ocean Rooms