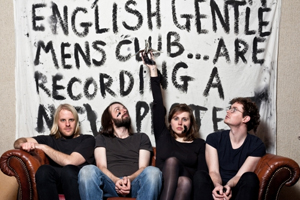 The Victorian English Gentlemens Club get pleasure from building cold-hearted shambolic weirdo pop music with drums, voices, mandolins, shrutis, bow-screamos, sparrows, telephones and bells. They listen to Grinderman, Liars, Wire, Deerhoof, Cardiacs and 'Flowers of Romance' by PiL, but have an affinity with the three-minute pop song.

TVEGC have just finished recording their fourth album in Paris with Jim Sclavunos of The Bad Seeds, which is due for release in Spring. Formed at Cardiff Art School, now based in London, TVEGC have toured enough times to drive round the UK and Europe blindfolded, as well as playing in the USA, Russia and Slovakia. With unashamedly lo-fi leanings they've progressively evolved from minimalist post-punk to the far darker no-wave feel which they now piss proudly from every pore