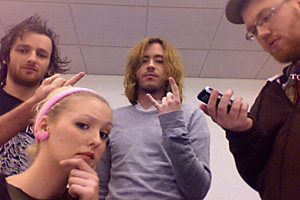 Iforward, Russia! are a band that could probably sit comfortably on any bill and still cause a pleasant fuss. They've released one album so far and have received alarming amounts of press in the NME and underground zines, mainly thanks to their frantic live show. The band have been quiet of late, finishing the recording of their second album. With only a handful of live shows this year, including a storming 'comeback' at Truck Festival, this will be one not to miss especially as it's their first London show since February. 'The missing link between At The Drive-in and a night of immense dancing fun. Tom's perfect nascent squeal rises above throbbing rhythmic mastery.' - Drownedinsound.com
IFORWARD, RUSSIA! GIGS AT CLUB FANDANGO
IFORWARD, RUSSIA!
THIS CITY
FOX CUBS
@ The Borderline