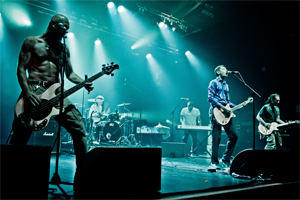 Jesus Jones have faced a long journey since their first single in 1989. Hitting number one with their second album 'Doubt' in 1991, it's a journey that has seen peaks and troughs but has brought the band to a place free of the whims of the press and the restraints of fashion.

EveryoneÄôs at it, these days, arenÄôt they? Reform, reunite, return. Well, with Jesus Jones thereÄôs one crucial difference: they never actually split up. ÄúThere was no Äúmusical differencesÄù, no acrimonious breakupÄù says keyboard player Iain Baker. ÄúNo burnt bridges to repair, nothing like that at all - weÄôve always been togetherÄù.

This show promises to be an exclusive event, seeing the band play their much-loved debut album 'Liquidizer' in its entirety.