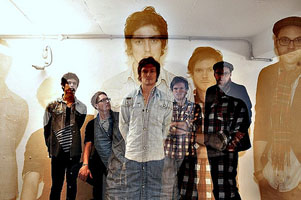 Channel Cairo are a London musical collective, hell-bent on writing giant, timeless songs. The 5 members met over a love of spine-tingling harmony, and music that sings louder and longer than any fad or fashion. With a sound that's been likened to Jeff Buckley, Radiohead, The Killers, and Local Natives, the 5 piece will release their debut single in August 2011 on Laissez Faire Club records - a track called Elephant Room, produced by Tom Fuller (Patrick Wolf, David's Lyre). The band grew up in the English and French countryside, and now record and rehearse in KingÄôs Cross.
CHANNEL CAIRO GIGS AT CLUB FANDANGO
CHANNEL CAIRO
ALL WE ARE
LILLIAN TODD JONES
@ The Bull & Gate