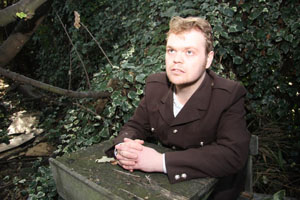 Paul Hawkins (solo) grew up in a small village near Bristol, spent his childhood in and out of hospitals then trained as a scriptwriter and spent brief periods working in zoos and psychiatric departments before deciding to write songs instead. He spent 18 months as a Daniel Johnston-esque acoustic singer-songwriter, has spent 5 years as the howling Alex-Harvey esque lead snarler of Paul Hawkins & The Awkward Silences and has now decided to start playing solo gigs again. Contrasting electronic outsider pop songs with plaintiff folk balladry, expect a bold, idiosyncratic and entertaining set from one the most captivating and compelling performers around. "Paul Hawkins sounds like no-one. Someone doing something truly on their own and making the rules up as they go along" Artrocker.
ARTIST LIVE SHOWS
The Bull & Gate
Tuesday 18th January 2011
MAILING LIST
Sign up to our mailing list here