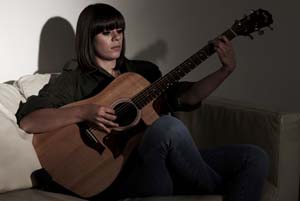 Liz Lawrence first picked up a guitar at the age of eight and started playing in bands as a guitarist at the age of thirteen. She went on to discover her singing voice when performing and writing with a ska band. Now studying Art in Devon she splits her time between the South West and the Midlands, playing gigs all across the UK. Her sound has been influenced by many genres of music from reggae through to folk, echoing Bob Dylan, Joe Strummer and Feist. Liz Lawrence has a unique vocal with depth in her lyrics commenting on her experiences of life.
ARTIST LIVE SHOWS
The Bull & Gate
Saturday 22nd January 2011 The Bull & Gate
Monday 20th September 2010
MAILING LIST
Sign up to our mailing list here