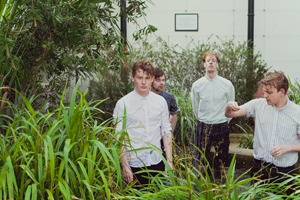 The Crookes have already toured the UK twice in 2013, once with Richard Hawley and then with Little Comets, as well as nipping over to Austin for SXSW. As befits their true Crookesaholic working spirit, both single tracks 'Bear's Blood' and 'Dance In Colour' are brand new and indeed never-released-anywhere-else-before. Rest assured that they have quite probably written and recorded the bulk of the follow-up to their current sophomore album 'Hold Fast' on any spare afternoons off, and while they toil and sweat gently whet your appetite for construction by checking the ace video for 'Bear's Blood' over at their official site.
THE CROOKES GIGS AT CLUB FANDANGO
THE CROOKES
THE HEARTBREAKS
HEY SHOLAY
@ Scala

Tuesday 3rd November 2009 The Crookes
Olfar
Nadine Shah @ The Camden Head 07:45pm - £4With Camden Bars Presents... The Best Of In The City
LANGUAGE
THE WINCHELL RIOTS
THE CROOKES
THE HOT MELTS
@ The Dublin Castle