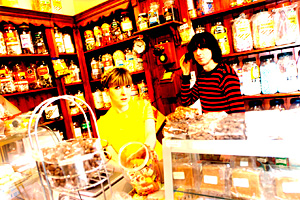 The Lovely Eggs are David and Holly. Named after two eggs found in an abandoned nest on Holly's windowsill, the pair started playing together in Paris and performed their first ever gig in New York in 2006. Since then they have been played on Radio One by Huw Stephens, Steve Lamacq and Rob Da Bank as well as Mark Riley and Tom Robinson on BBC 6 Music. Last year they released a single and 7" EP and recorded a Radio One session at Maida Vale. Marc Riley is also a fan of the band's kooky kitsch avant-garde sound and invited them to perform a live session on his show, as did XFM's John Kennedy as part of Manchester's 'In The City' 2008. The Lovely Eggs have played all over the world from Amsterdam squats and Los Angeles scrap yards to steam trains in Ripley and Huw Stephen's Swn Festival!

They were voted ÄòBest Band of 2008Äô by blog-site The Devil Has The Best Tuna and radio hit ÄòI Like Birds But I Like Other Animals TooÄô was voted ÄòBest track of 2008.Äô Their spellbinding debut album 'If You Were Fruit' was released on Cherryade Records in June 2009 and attracted rave reviews, a national UK tour, an XFM session and a spot at this year's Indie Tracks Festival.

With lots of exciting things coming up for the band, we're over the moon to have The Lovely Eggs back at the Bull & Gate.