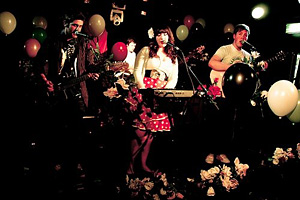 Yokoko were formed in 2007 by Sam and Sev with the aim of creating upbeat, catchy pop tunes that everyone would sing and dance to. They have since gone on to play some great gigs and festivals around London and the South where this very thing regularly occurs... Having received airplay on BBC Radio Bristol Introducing, BBC6 introducing with Tom Robinson, Kooba Radio, and Radio Reverb and having gigged for over a year they feel prepared to release some of their material. Yokoko have recently been chosen by Coca-Cola and Paste Magazine (US) to have our track "Sally Doesn't Care" used in their "Under The Radar Acts" promotion from March 2009. Their influences include, Burt Bacharach, The Cure, Abba, Alphabeat, Belle and Sebastian, Queen, Camera Obscura etc... "Possibly the happiest, poppiest band ever, Yokoko are a mission to destroy bad moods with hugs, rainbows and kittens" - spoonfedlondon.co.uk
YOKOKO GIGS AT CLUB FANDANGO
THE LOVELY EGGS
ARMY NAVY
THE 18 CARAT LOVE AFFAIR
YOKOKO
@ The Dublin Castle