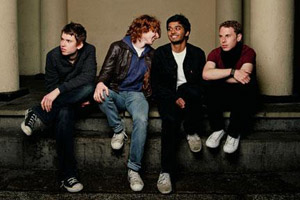 Battle last headlined for Club Fandango and 6 Music back in December 2005. Now they're the first band to return for a 6 Music shindig. Battle peddle a melody-lashed contempo-retro sound that belies some deliciously crafty experimental edges. 'Break the Banks', the debut album from Battle, is set to be one of the key releases of 2007. Fired by the incendiary new single 'The Longest Time' (released June 11th), these organic, atmospheric and emotionally intelligent songs reveal a kinship with greats as varied as The Smiths, Talking Heads and 'post Britpop' Blur.
BATTLE GIGS AT CLUB FANDANGO
BATTLE
THE BE BE SEE
THE DISPLACEMENTS
@ The Borderline

Thursday 31st May 2007 Battle
The Be Be See
The Displacements @ The Borderline 07:45pm - £8 / £7 with flyer
BATTLE
THE SUNSHINE UNDERGROUND
THE STROLLERS
@ The Water Rats

Thursday 17th February 2005 Seafood
Battle
Seeing Scarlet @ The Borderline 07:45pm - £6 / £5 with flyer** In Association With The Bmi **
JOHNNY PANIC
WE WILL BE PILOTS
BATTLE
THE FILTHY MILK
@ The Dublin Castle