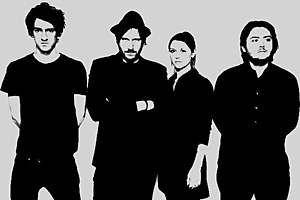 Who Owns Death Tv formed in mid 2007 and has so far played gigs with Qui, Future Of The Left, Jubilee and Gay For Johnny Depp amongst others. 'A pair of former Million Dead musicians, Julia and Tom, get together with a couple of guys intent on screaming the house down with hook-laden and hard-edged rock thatÄôs not exactly a million miles away from the furious bluster Mclusky kicked up back in the day.' - DiS.