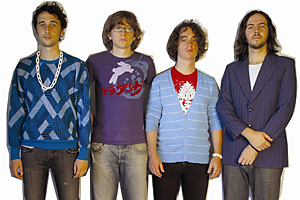 The Boat People are described as the 'masters of perfectly unconventional pop' (Inpress). the acts The Boat People have supported in Australia give a further inkling of their sound: The Shins, David Byrne, Dogs Die in Hot Cars, Idlewild as well as fellow natives Missy Higgins and Evermore. However, obvious heroes Crowded House are still where comparisons are most readily drawn. Having two lead singers also evokes a Gomez-like arrangement in which whoever writes the song has to sing it . Other Comparisons include Split Enz, Wilco, John Lennon, Coldplay and The Dandy Warhols.
THE BOAT PEOPLE GIGS AT CLUB FANDANGO
THE AIRBORNE TOXIC EVENT
THE RACE
THE BOAT PEOPLE
BEAR HANDS
@ The Dublin Castle