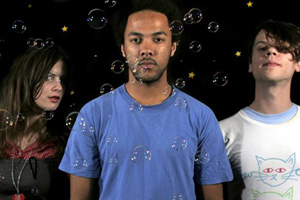 Johnny Foreigner are the new kings of shock and awww. They listen to loud and quiet music, play guitar with one hand, take too much time off work, write slogans on their t-shirts, and make up noisy pop songs about girls and gin and the gradual dehumanisation of the city centre. They think they are Chicago 1997 or a Pacman Ghost. They have been described as 'the most serene republic singing over cap`n jazz' but tell taxi drivers they are country to avoid awkward conversations. Recently they have played with Late of the Pier, Noah and the Whale, Blood Red Shoes, Hot Club de Paris, Good Books, Sky Larkin, Good Books, and played the first few dates of the Los Campesinos! Tour. 'Gareth from Los Campesinos says were one of his favourite bands and Jarvis from Meneguar says were cool. This makes us smile. A lot.'
JOHNNY FOREIGNER GIGS AT CLUB FANDANGO
FRANKIE & THE HEARTSTRINGS
JOHNNY FOREIGNER
THE SOCIAL CLUB
FELT TIP
@ 229