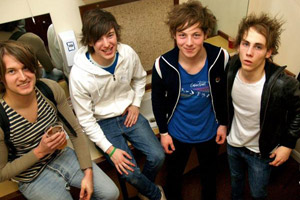 Look See Proof headline 229 to celebrate the launch of new single 'Local Hero' released on November 12th on Weekender Records. It's been a whirlwind year for the Hertfordshire 4-piece with last single 'Casualty' spending an unprecendented 9 weeks in Club NME's top 10, peaking at number 1 described by the mag as 'indie in excelsis... pure pop with all the goods bits present and correct'. 2007 has also seen them support such luminaries as Johnny Borrell, Ash and Pigeon Detectives not forgetting their exhausting but exhillerating UK tour with The Twang. Catch them in a small venue while you still can. (Photo by Liam Scarlino)
LOOK SEE PROOF GIGS AT CLUB FANDANGO
LOOK SEE PROOF
NEW HOMES
BOOM IN THE DIAMOND INDUSTRY
@ 229