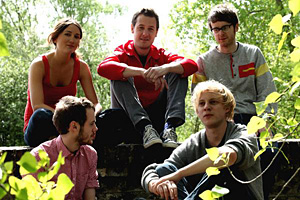 My Sad Captains formed in 2006. The quintet take the country-tinged American sounds of Sparklehorse and Wilco and lend them a sparkling, harmony-rich pop edge, touched with occasional fiery noise outbursts. Based in Camden, London, and named after a poem by Thom Gunn, My Sad Captains have been played on the radio by the great and the good - Steve Lamacq and Huw Stephens on BBC Radio 1; Gideon Coe on BBC 6Music; John Kennedy on XFM; Radcliffe and Maconie on BBC Radio Two; Nic Harcourt on KCRWÄôs influential Morning Becomes Eclectic show Äì while their lilo-tastic video for debut single ÄúBad DecisionsÄù on Fortuna POP! made MTV2.

Their catchy melodies and easy charm have quickly made them favourites on the London gig circuit, having sung their hearts out across town with the likes of Tilly and the Wall, Why?, Darren Hayman, The War on Drugs, Pete and the Pirates, Loney Dear, Get Cape Wear Cape Fly, and The Broken Family Band. Last year also saw their first festival appearance at End Of The Road. Their last single 'Great Expectations' features in the new indie film '1234' which premiered at this year's London Film Festival.