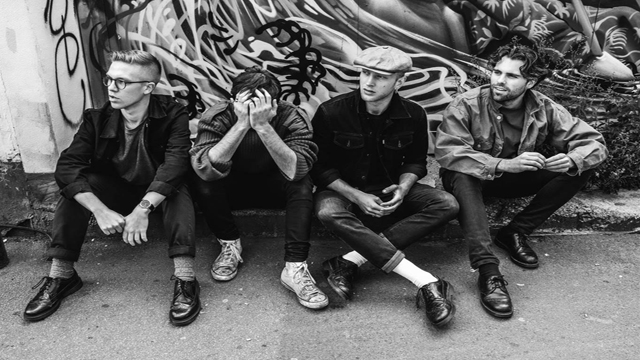 Four young men in their early 20s who began their journey in East-Anglia and now find themselves in London via the wreckage of previous bands, earning their stripes, honing their craft in indie-rock and post-punk groups.
Keep Up, made up of enigmatic model Evan Jones, ex members of The Kabeedies, Francis Bell and Rory Hill and guitarist from The Cheek Christian Daniels, are having no trouble keeping up appearances with their nonchalant attitude and yearning lyricism. Like all truly great bands they are not just a product of their environment they are an expression of it, an attempt to turn it into something beautiful, something of meaning.

This preoccupation with transformation informs everything they do. Singer/guitarist Evanâs lyrics are concerned with tragedy, heartache and a constant search for solace. Evan cites an unhealthy obsession with Leonard Cohenâs melancholic, sex-drive-spirituality as a key influence and there are shades of Joy Division in the unflinching courage to bare his soul before the world.

The drive to wear their heart on their sleeve extends to the music. The songs are proud, anthemic, assured. Francisâ Drums race and rattle, like a bankrobber fleeing the scene of a crime on a motorbike. Roryâs fuzz-bass rides in the sidecar wearing sunglasses. Guitars chime and echo, cinematic and splendid. The effect is at once grand and intimate: The War On Drugs toned sepia and inflected with the grace and subtlety of The Walkmen.

Bassist Rory explained âitâs like big, American rock n roll party but for a party at the end of the summer. Tinged with sadness.â 'Fear', the lone track the band have shared with the world as yet, holds that ethos at its core. Glistening guitars reminiscent of New Order ripple brightly beneath Evan's expressive, aching vocal. It's a glorious collision of light and dark; that classic pop trope of lifting a sad song out of the doldrums and making it sound happy. Others in their arsenal, like the jagged 'Dead Beat', could slot neatly alongside The Maccabees, or, as on 'I'll Wait For You', boast the chiming, hazy feel of The Velvet Underground circa The Velvet Underground & Nico, while Evan's vocals have a slight hint of a desolate Jonathan Richmond to them.

This, then, is Keep Up. Four young men, intent on converting the negative, chaotic and disastrous into beauty. Trying to Keep Up. Their journey is only just beginning.

âKeep Up bring solid, British indie rock back to the forefrontâ - TMRW Magazine

âLike all truly great bands â KEEP UP are something beautiful. Something of meaningâ WONDERLAND MAGAZINE