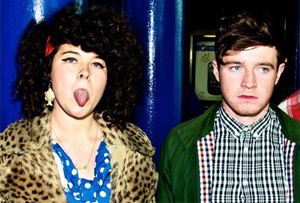 Bentcousin are twins Patrick & Amelia, born a decade apart, (on the cusp of 89/90), they make music that has been described as 'cutecore' 'acidpunk' and 'newpop'. They've been gigging in London & Brighton for the last year and released their debut EP on New York's Team Love in Feb 2013 - entitled, everybodys got one. They sing cheerful melodies that explore dysfunctional relationships, guilt, anxiety death, because they know these are the tasty bits. They have recently collabrated with Keith Levene on a new song. They lack ambition, they want to be WHAM! size.
ARTIST LIVE SHOWS
Buffalo Bar
Tuesday 14th January 2014
MAILING LIST
Sign up to our mailing list here