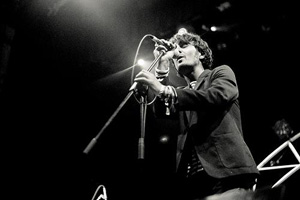 Maupa are six blokes from Accrington who produce haunting soundscapes as bleak and as beautiful as the Lancastrian moors which border their upbringing. NME: "Like fellow Lancashire men The Verve and Elbow before them, Maupa make a joyously beautiful noise that belies their bleak mill town surroundings. This Accrington six-piece only really have one setting - "epically magnificent" - and it makes an utterly mesmeric listen. While the stratospheric guitars of "once in a while" and "Toy Trains" may occasionally lean towards prog, their chiming folk-flecked songs are never laboured, thanks to singer David Boon's extraordinary, breathy timbre. For far too long, these everyblokes have been one of the northwest's best kept secrets. And whether or not "Run Run Sleep" sees Maupa finally set off down Guy Garvey's mob's path to recognition, though, it's still a total gem."
ARTIST LIVE SHOWS
229
Wednesday 25th March 2009 Night & Day Cafe
Friday 30th July 2004 The Bull & Gate
Thursday 8th January 2004
MAILING LIST
Sign up to our mailing list here