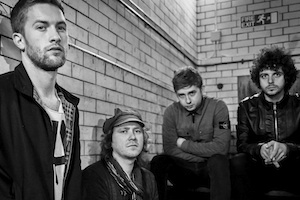 Vox Empire disseminate indie rock and roll propaganda all the way from their base in Southend, Essex.


They hit the festival trail last summer playing Hard Rock Calling and V Festival and also joined The Virginmarys on their UK tour in November. They have recently been spending time in the studio with Arctic Monkeys producer, Ross Orton, the first results of which you'll hear on their debut EP, released in March.